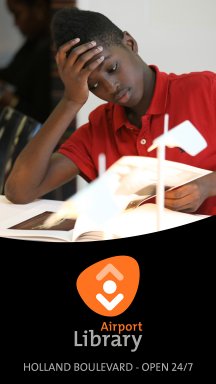 Airport Library at Amsterdam Airport Schiphol is the world’s first airport library. Aiport Library is an initiative of a group of Dutch library organisations: Probiblio, Association of Public Libraries of the Netherlands and the Public libraries of Amsterdam and Haarlemmermeer, with support from Schiphol International Airport. In 3,5 years' time the library attracted more than 1.25 million visitors. It has repeatedly been proclaimed by foreign visitors as one of the best places to stay at Schiphol, and has been featured in The New York Times. Airport Library is also the first of a series of about twenty library amenities all around the world.

In 2014 Airport Library closed due to renovations at Schiphol. The renewed Airport Library opened on 7 September 2017, under supervision by the Stichting Collectieve Propaganda van het Nederlandse Boek (CPNB). Since 2019 the Dutch foundation for literature (Nederlands Letterenfonds) is responsible for Aiport Library, and the daily exploitation is carried out by Dutch library organisation Probiblio.

Design and facilities: Superuse Studios in collaboration with Issos and Dydell.